Mona Ainu’u – Broadcasting Corporation of Niue
Closing Bulletin, June 2011, Apia Samoa - For a small country in Central America just below Mexico, Climate Change issues are as real as those in every other Small Island Developing State. 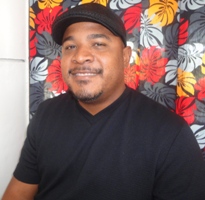 Belize is eight thousand square miles with approximately three hundred twenty thousand in population.  In comparison to some Pacific countries this should provide sufficient human resources for adaptation initiatives, but there are constraints, says Colin Gillett, Director of the Coastal Zone Management Authority and Institute in Belize.
“The biggest challenge is the size of the country compared to how many people there are, so the technical expertise is limited to a handful of people and it’s hard, it’s difficult for us to get the word out and to actually do the work because it’s a lot more miles to cover”.
It is not an uncommon disadvantage in SIDS, and with increasing global concerns, the most vulnerable and the least contributors to climatic influences, the struggle to keep abreast of adaptation developments continues.
Communication says Colin, is essential and the “Lessons for Future Actions” climate change adaptation conference in Samoa this month has produced important feedback for his countries consideration in adaptation.
“There are a lot of mangrove planting projects and coastal meetings with the communities and the need to get involved and more aware of the impacts of climate change, so a lot of it is similar but the difference is the way some countries are getting the word out, some of them are using churches more frequently to do this, which is something we haven’t done, I don’t think we have actually touched on yet, so that’s a great idea that I am going to take back”.
With much emphasis on financial constraints Colin said, countries need to refocus. There are specific approaches to combating changes.
“Part of what we have been focusing in Belize especially at the coastal management authorities is looking at projects that don’t require that much money to implement so we are trying to be as cost effective as possible, but yet successful because for too long people wait before they get the financing before they start a project, but we believe there’s a lot of small things we can do that together will add up to be tangible enough to adapt”