By Makereta Komai for Climate Pasifika in Panama
02 October 2011 Panama --- The European Union (EU) is not very optimistic of a legally binding agreement coming out of Durban in December.
Its chief negotiator at the resumed climate change negotiations now underway in Panama City, Dr Artur Runge-Metzler said Durban will only be able to produce a legal framework for a global climate deal.
“In Durban we should be able to define the time line and also the scope of a future global deal, said Dr Runge-Metzler.
Despite the EU’s announcement that it’s willing to consider a second commitment period for the Kyoto Protocol, the EU’s director general for environment outlined to journalists here in Panama, its conditions.
“We will be ready to sign a deal but we will have to see that other major countries will be able to do so also. Committing to a second period is not enough. We want to see improved environment integrity of the Protocol. 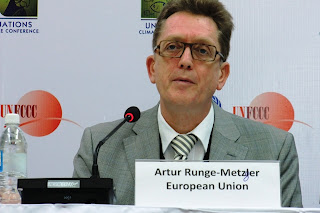 “If the EU was to move into a second commitment period, jointly all our 27 members only cover about 11 percent of the overall global emissions.
“The question is what happens to the other 89 percent especially now that Canada, Japan and Russia have indicated they are not keen on a second commitment period.
Developing countries now expect the EU to take a lead role in convincing other major emitters to commit to an extension of the Kyoto Protocol.
“It’s only natural that they turn to the EU. They are saying that we are the saviour of the Protocol.
“But there are still many unresolved issues with developing countries. Some of them are saying that you only need to commit to targets but we are saying we want to see an improved environment integrity of Kyoto, we also want see decisions on the rules of land-use, land use change and forestry (LULUCF) and coverage in terms of gases. But there is still some resistance from developing countries to discuss these issues.
“For the EU, these issues are integral part of a deal on the Kyoto Protocol, said Dr Runge-Metzler.
At the Panama talks, the European Union and its 27 members hope that a draft negotiating text will form the outcome of the weeklong negotiations.
“We are hoping that a draft negotiating text comes to the table fast to make sure that we land in Durban without missing a landing spot, said the EU climate lead negotiator.
Poland as current chair of the European Union hopes Durban will fill the political gaps left in the Cancun Agreement.
Poland’s climate change negotiator, Tomasz Cruszczow told journalists the gap in emission reduction and mitigation action pledge need to be raised to an ambitious level. At the same time Durban needs to agree on how wealthy nations will mobilise the US$100 billion pledged in Copenhagen
“Our finance ministers are meeting straight after Panama, on 10th October in Luxembourg to take a final decision on the European Union commitment before Durban.
“For Durban, we need the adaptation fund, climate financing and technology. This means that the new institutions need to be efficient and effective, said Cruszczow.