And, Nauru’s Margo Deiye, speaking at a side event at the Rio+20 conference here in Rio de Janeiro said an initiative like this by the Julia Gillard government is encouraging for Pacific Small Island Developing States (PSIDS) who are championing the concept of a ‘blue economy.’ 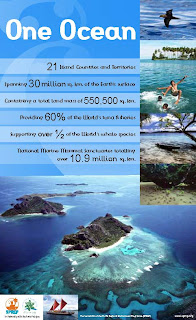 “As you know, the people of the Pacific are closely connected to the oceans. About half the citizens of the Pacific Islands live in coastal areas. Papua New Guinea and the Solomon islands are part of the Coral Triangle, the global center of coral reef diversity with more species of fish and corals than anywhere else on the planet.

“For our countries, healthy coral reefs and marine ecosystems are the foundation of coastal communities’ livelihoods, our culture, critical to local food security, and, in many cases, major contributors to our national economies through fishing and tourism revenues.

Healthy reefs, Deiye said are essential for marine biodiversity and for protecting coastal communities and infrastructure from storms which are ever more intense and damaging as the oceans warm and sea level rises.

Citizens of Pacific SIDS will suffer in terms of both food, economic and physical security as a result of coral reef degradation, undermining our countries’ opportunities and aspirations for sustainable development.

Ms Deiye said ocean acidification is a fundamental threat - alongside climate change and sea level rise - to our communities.

That is why the Pacific is well represented at the Rio+20 to seek political will to implement what has already been agreed in relation to marine and coastal resources.

“We need stronger action now to restore fish stocks, so that they are healthier and more resilient as the seas acidify.

“We need real action on the ground and on the seas. Rio must just be the beginning. Commitments made here must be implemented on the ground. And we need commitments of capacity development and support so that developing countries can build resilient marine ecosystems.

The Parties to the Nauru Agreement have adopted measure to limit tuna catches, through a “vessel day scheme” to reduce fishing pressure, and ban on high seas fishing, among other measures. These are big commitment by small countries to restoring tuna stocks – as a continued source of income for sustainable development.

“If small countries like the Pacific SIDS that are so highly dependent on fisheries income can take these measures, we would like to see other countries commit to greater efforts to reduce fishing pressure and restore stocks.” said Ms Deiye.
Agenda 21, penned here 20 years ago, and the Johannesburg Plan of Implementation both laid the way forward – but implementation has been sorely lacking, she said.