The energy at Athletes Park 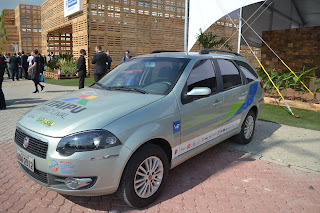 13 June 2012, Rio de Janeiro - An increasingly familiar sight at the Rio+20 Conference venues are electric vehicles of all shapes and sizes.
The Athlete’s Park exhibition site has electric vehicles from several energy companies and vehicle manufacturers, including the Veículo Elétrico from Itaipu Binacional, a bi-national government-owned electricity generating company.
The company is jointly owned by the governments of Brazil and Paraguay and runs the Itaipu Dam, a hydroelectric dam located on the Paraná River, which supplies 19% of the electricity used in Brazil and 90% of the same in Paraguay.

The manufacturers have partnered with a major Brazilian utility company to power the cars which boasts zero emissions and better performance than gasoline-powered vehicles.
Energy companies have flocked to Athlete’s Park to exhibit innovations in renewable energy and zero emissions vehicles as energy is one of the seven priority areas of the Rio+20 Conference.
Pacific Island countries will also have a chance to showcase recent initiatives undertaken in the area of climate change mitigation, in particular renewable energy, at the Pacific side event held on 19th June 2012.

“We’ll be looking at energy issues in the Pacific in particular,” said Mr. Sefanaia Nawadra, Director of Environmental Monitoring and Governance Division at the Secretariat of the Pacific Regional Environment Programme (SPREP).

“Issues such as remoteness, small economies, transportation costs, limited types of renewable energy technologies that can be used, as well as related issues like waste management of those energy issues.”
“The idea of the Pacific side event is to bring forward these issues and allow for some discussion, not only amongst Pacific Island Countries and Territories but also with our partners.”
He also mentioned that, although not a UN member, Tokelau is attending Rio+20 to showcase their initiatives in renewable energy after being given the opportunity by SPREP, of which they are a member country.

Tokelau has a target to be 100% renewable energy efficient by September 2013, this total project is costing 8.5 million dollars resulting in 93% photovoltaic system with a coconut oil hybrid as a reserve.