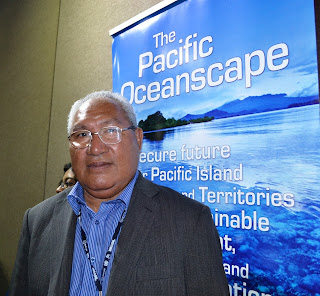 19 June 2012, Rio de Janeiro - Tokelau is committed to addressing fossil fuel alternatives in their effort to battle the impacts of climate change
This was stated by the Ulu, or head, of Tokelau at the Pacific side event held at the United Nations Conference on Sustainable Development, Rio+20.
Following a strong message put forth in Durban, South Africa, at the UNFCCC COP17, that by September 2013, the 1,500 residents on the island nation of Tokelau would be 100% renewable energy efficient, the Ulu o Tokelau, Faipule Kerisiano Kalolo, outlined the progress they have made towards their goal.
“The Tokelau electricity system has been recently upgraded to a 24 hour supply system, with the current energy system running on 95% diesel powered and 5% solar,” he said.
“All people in Tokelau now have access to the power supply.”
Energy is one of the five key priority areas identified under the Tokelau National Strategic Plan for Infrastructure and Development, and they have been closely supported by the Government of New Zealand in creating their national energy strategy which was drawn up with technical support input from UNDP
“Core to Tokelau’s energy strategy is the implementation of a renewable electricity system that is ecologically sustainable and lessens Tokelau’s dependence on imported and costly fossil fuels.”
Speaking to Mr. Sefanaia Nawadra, Director of the Environmental Monitoring and Governance Division of the Secretariat of the Pacific Regional Environment Programme (SPREP), after the successful side event, he said, “Although Tokelau is not a full United Nations member, they are full members SPREP and other regional organizations and we want to provide a platform for them to be profiled at these global events.”
The Ulu o Tokelau presented at a panel of five Pacific leaders at the Pacific Side event including the Minister of Natural Resources and Environment of Samoa, the President of Kiribati, the President of the Federated States of Micronesia, and the Prime Minister of Vanuatu.