Weapon contamination at Rio+20 has links to the Pacific 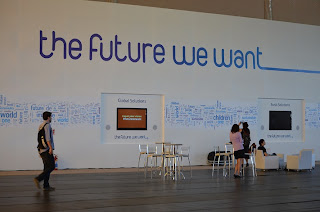 15 June 2012, Rio de Janeiro - The different ways that war affects people is shared at the Rio+20 by the International Committee of the Red Cross (ICRC), one in particular is that of weapon contamination. The ICRC has a display showing they different ways lives have been impacted by war.

The Pacific can relate to this as there are islands that are affected by weapon contamination. These island states including Papua New Guinea, Palau, Federated States of Micronesia, Vanuatu, Solomon Islands and Marshall Islands, all of whom are still suffering from the abandoned weapons from World War II left on their lands and in their oceans over 60 years ago.

World War II left behind unexploded ammunition such as grenades, bullet shells, bombs and rockets. Even bigger weapons are still there like the sunken ship USS Mississnewal in Federated States of Micronesia (FSM). The US Navy, US Coast Guards and the Pacific Regional Environment Programme (SPREP) helped pump out all the oil of this vessel that was spilling and polluting the ocean.

However there are still many more sunken WWII wrecks in the pacific especially in Chuuk Lagoon in FSM and Iron Bottom Sound in the Solomon Islands. It is more than 70 years since WWII and there is real risk of leaking from these ships.

Weapon contamination can destroy wild life and degrade soil. They are also dangerous in the if children are exposed to unexploded ammunition that can maim or kill them.

These problems were raised at the 1992 Earth Summit in Rio in 1992 they were addressed in Agenda 21, Principle 24 - “protect the environment even in times of armed conflict”.

20 years on at the anniversary of the Rio Earth Summit, the world will discover if this principle has been followed through.﻿