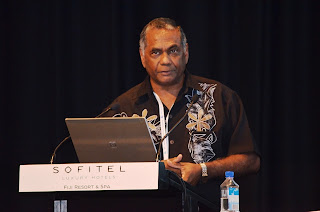 Dr. Jimmie Rodgers, Director-General of the Secretariat of the Pacific Community, praised the leadership shown by the nations of the Pacific and their contribution to global efforts to address the challenges posed by climate change and disasters. By embarking on a joint strategy to address these two key challenges, Pacific Island countries and territories are leading the world in rationalizing their approach, which provides a best practice example for other countries and regions of the world.
“We opened a new chapter with this meeting. What we have witnessed this week is a demonstration of vision and leadership arising from the countries of the Pacific region. The final goal is the foundation of a safe and secure future for Pacific people now and for those to come,” says Dr. Rodgers.

The regional initiative has been praised by the United Nations Office for Disaster Risk Reduction as the springboard that will provide impetus to discussions at the global level in the coming 18 months.

Jerry Velasquez, the Head of the United Nations Office for Disaster Risk Reduction (UNISDR) in Asia Pacific, said the region had again demonstrated its global leadership by placing the future of disaster risk reduction work explicitly within a holistic and overarching approach to sustainable development. 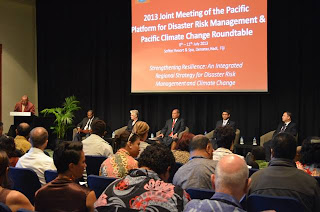 “With its identification of national leadership of integrated action in disaster risk management and climate change supported by enlightened regional and international partnership as key, UNISDR is confident that the region will achieve its ambitions and more importantly make a difference to vulnerable communities around the Pacific, which is the ultimate measure of success,” says Velaquez.

Director-General of the Secretariat of the Pacific Regional Environment Programme (SPREP), David Sheppard, said “This has been a meeting with a rich and exciting programme. Countries have already successfully commenced work on linking their climate and disaster functions and an integrated strategy at the regional level will enable us to support these efforts while avoiding competition and duplication. We now have a clear path forward for bringing an integrated strategy to fruition.”
The meeting achieved a world first by bringing together the two principal regional conferences on disaster risk management and climate change. The joint meeting will contribute to the formulation of an over-arching regional strategy and framework for climate and disaster-resilient development to be considered for endorsement by the Pacific Islands Forum Leaders in 2015. 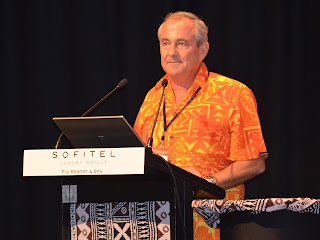 An integrated approach to addressing disaster risk reduction and climate change concerns will mean better use of national and regional capacities and resources to address the risks posed by hazards, whether they are extreme weather events such as cyclones and droughts or ‘slow onset’ events such as rising sea levels or ocean acidification associated with climate change. The strategy will further progress the agenda of enabling the Pacific Islands region to build resilience to our changing climate.