Copenhagen, 14 December - It is appreciated by Climate Action Network (CAN) International that most vulnerable countries suffering from climate change impacts have been working towards a legally binding agreement during the COP15. 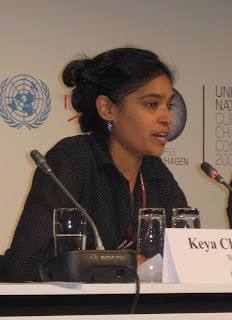 Keya Chatterjee (pictured left) from WWF said the declaration of the legal treaty by Alliance of Small Islands States (AOSIS) last week was a positive step for those who have their survival at stake.

“The step by AOSIS showed their determination to protect their people,” she said.

“We had many impressive announcements coming from countries before the meeting started and after a bumpy week, I am looking forward to leadership from the Head of states to work out a deal.”

Marcelo Furtado, a representative from Greenpeace during the CAN negotiations assessment brief expressed his concerns that the decision made in would be a life and death situation for some countries.

“There is no time for leaders to walk in here without responsibility, without vision and without leadership.  We are talking about a moment in history where we need action,” he said.

Furtado believe that reasons such as a country’s economy would suffer or industries would suffer cannot be prioritized over the lives of the most vulnerable people.

“With the negotiations ending on Tuesday and the arrival of heads of states by Wednesday, the onus is now on the political leaders to make the final decision on the outcome of the conference,” said Alden Meyer from the Union of Concerned Scientists.

Hopes are high amongst these people for not only a legal but a responsible outcome as well from the COP15 as it reaches towards the Ministerial discussions soon.