By Makereta Komai in for Climate Pasifika
01 June 2010 , --- is one of the first countries to make available short term climate change funding, as promised by industrialised nations in .
The first tranche of $355.4 million was announced in Tuesday at the beginning of the climate change talks. 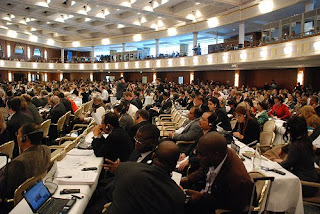 Of these funds, $178 million will go towards international climate change adaptation, targeting Least Developed Countries (LDCs) and Small Island Developing States (SIDS), which have limited capacity to adapt to the adverse impact of climate change.
Another $9 million will go towards the replenishment of the Least Developed Countries Fund (LDCF), a financing mechanism set up under the United Nations Convention on (UNFCC).
assured that it was working with other donors to minimise bureaucratic processes to ensure the funds are accessible to vulnerable countries in a transparent manner.
, on behalf of the European Union also announced that it was committing 2.4 billion Euros for the fast track financing for adaptation.
The announced an allocation of $375 million in 2010 to Climate Investment Fund and a further $50 million for the replenishment of the LDC Fund. In the 2011 budget, it has set aside $1.4 billion, a 40 percent increase in additional funding to climate change.
in response urged , the EU and other industrialised nations making contributions to the fast track funds to ensure that the funds are new and additional to their normal overseas development assistance (ODA) commitment.
“Contributors to the fast track funds should be sincere and not just change the label of the funds to fulfil the pledge made in .
Developed nations promised to deploy US$30 billion in short term financing from 2010-2012 to kick-start climate change action in developing countries.
“These funds are indeed important for the survival of small island developing states, as explained to us by the representative of , on behalf of small island states,” pleaded a Chinese official in his intervention on the chair’s proposed text.
Despite the flow of kick-start funds for climate change, there is still no clear guideline on who is to manage and disburse the funds.
Ms Komai will be covering the Bonn negotiations from 31 May – 11 June 2010, thanks to funding from Secretariat of the Pacific Regional Environment Programme (SPREP) and the World Wide Fund for Nature (WWF). She will provide daily coverage of the negotiations via PACNEWS and the Secretariat of the Pacific Regional Environment Programme’s climate pasifika blogspot, http://climatepasifika.blogspot.com