By Makereta Komai, Climate Pasifika Media in Cancun, Mexico
08 DECEMBER 2010 CANCUN --- United Kingdom’s climate change secretary, Chris Huhne agrees that insurance costs associated with climate change must be dealt with, in the context of the negotiations currently underway here in Cancun.
And, he used the huge pay-out by insurance companies to victims of floods as examples of the huge costs involved in a disaster caused by climate change.
“In the UK alone, over the last 10 years, the pay-out for flooding was 4.5 billion pounds whereas in the previous 10 years, it was 1.5 billion pounds.
“This is hard business evidence of the costs that are being inflicted on our economies by climate change and we have to tackle this problem, said Huhne.

Huhne’s concern is shared by the Alliance of Small Island States (AOSIS), who have been calling for loss and damage to be reflected in the outcome of the Cancun talks.

“Even with the 1.5 degree Celsius that AOSIS is pushing for, there will still be high damage and cost and that is why we must have an adaptation committee endorsed here in Cancun, said Ambassador Dessima Williams speaking on behalf of AOSIS. 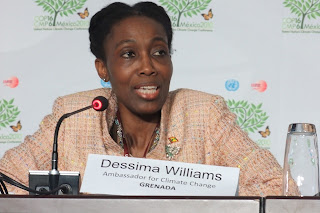 “We also need to establish a loss and damage mechanism to begin the global task of dealing with the unavoidable damage from the impacts of climate change. '

“Robust scientific information is essential to improving our understanding and to guide policy makers and leaders.

Responding to the findings of the Emissions Gap Report by the United Nations Environment Programme (UNEP), Ambassador Williams said while report does not specifically talk about the 1.5 degree goal, AOSIS is optimistic that ‘our goal is feasible’

“The foundation for elements for that reduction must be laid here in Cancun and not just on mitigation.

“Two years ago, at COP14 in Poznan, AOSIS set a long term goal of limiting the temperature to below 1.5 degrees Celsius. At that time, critics described this goal as unrealistic but AOSIS believed and continues to believe that it is fundamental for our survival and there is a now a coalition of 106 countries that have embraced this goal.

“If you have a village with 192 houses and 106 of them are beginning to warm up to the level of burning, you clearly want to two things – insurance for loss and damage and take measures to cool the heat, said Ambassador Williams

“The UNEP report is an extraordinary scientific endorsement of the need for more ambitious policy measures and outcomes in a balanced way at Cancun.

The draft negotiating text is still referencing 2 degree Celsius with a process of review expected in the outcome document next week, said Ambassador Williams.

The Emissions Gap Report, published by the United Nations Environment Programme (UNEP) clearly shows a 5 Gigatonne gap between the climate science and the commitments under the Copenhagen Accord.

If all the voluntary commitments to reduce greenhouse gas emissions in the Copenhagen Accord were met, it would only cover 60 percent of the emissions reduction needed to keep the global temperatures under 2 degrees Celsius, said the report.

What happens to the 40 percent is the question in the mind of negotiators here in Cancun, if all the pledges were met.

The UNEP report is jointly authored by over 30 leading scientists from numerous international research institutes.

The report, whose compilation was led by the UNEP Chief Scientist, finds that:
Under a business-as-usual scenario, annual emissions of greenhouse gases could be around 56 gigatonnes of CO2 equivalent by 2020. As a point of reference, global emissions were estimated to be around 48 gigatonnes in 2009;

Fully implementing the pledges and intentions associated with the Copenhagen Accord could, in the best case identified by the group, cut emissions to around 49 gigatonnes of CO2 equivalent by 2020;

This would leave a gap of around 5 gigatonnes of CO2 equivalent that needs to be bridged over the coming decade - an amount equal to the emissions of all the world's cars, buses and trucks in 2005;

In the worst case identified in the report - where countries follow their lowest ambitions and accounting rules set by negotiators are lax rather than strict - emissions could be as high as 53 gigatonnes in 2020, only slightly lower than business as usual projections. 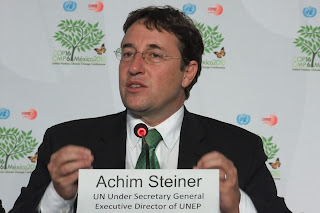 Achim Steiner, UN Under-Secretary General and UNEP Executive Director, said: "The results indicate that the UN meeting in Copenhagen could prove to have been more of a success than a failure if all the commitments, intentions and funding, including fully supporting the pledges of developing economies, are met."
"There is a gap between the science and current ambition levels. But, what this report shows is that the options on the table right now in the negotiations can get us almost 60 per cent of the way there. This is a good first step, said Steiner.