Linked to climate change and the warming of oceans, ocean acidification is the consequence of rising pH levels in oceans. This is a result of the oceans absorbing larger amounts of carbon dioxide from the atmosphere. 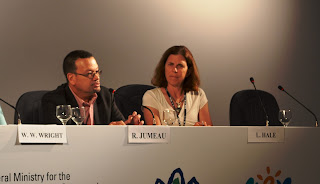 Agreeing with this, the Ambassador for Climate Change and Small Island Developing States (SIDS) Issues from Seychelles, Ambassador Ronald Jumeau, says that the cause of ocean acidification is the rise in CO2 emissions and called for immediate action to reduce emissions.

“Only deep cuts in emissions can help us now,” he said.

Ocean acidification and other elements that link to climate change such as coastal erosion and salination of water sources have been identified as serious concerns for the Pacific region, especially in Fiji.

“The challenges posed by these occurrences are faced on daily basis by people living in coastal regions,” says Mr. Luke Daunivalu, Deputy Permanent Representative of the Permanent Mission of Fiji to the United Nations.

“They have to do so much more just to live day by day by going further out in order to catch fish or to travel longer distances for their children to go to school. These issues are affecting real economic livelihoods and causing challenges that were not there before.”

Daunivalu says that the Fiji has brought these issues to Rio in the hopes that the outcomes will reflect the need for clear recognition and a firm commitment from all countries to contribute to the alleviation of the challenges faced in the Pacific.