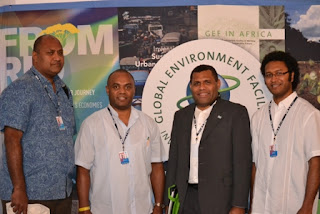 16 June 2012, Rio de Janeiro - Fiji and the Pacific Small Island Developing States (PSIDS) have strongly advocated for more political will to be directed from the Rio+20 towards the well-being of oceans and fisheries, as well as to the strengthening of the connection between oceans and sustainable development.

“If sustainable development is our core motivator and lies at the heart of our actions today, then we can build a future that secures the livelihood of coming generations,” said the Ambassador of Fiji to Brazil, Ambassador Cama Tuiloma.

“Likewise if the international community is to move from rhetoric to action in saving the declining health of global oceans, we must address the root causes in a truly comprehensive, direct and honest manner now.”

An important issue relating to oceans raised by Fiji was the needs for the outcomes document address the gaps that are known to exist.

“For example, in the Law of the Sea Convention, we need an implementing agreement to address the marine biodiversity in the high seas,” said Mr. Luke Daunivalu, Deputy Permanent Representative of the Permanent Mission of Fiji to the United Nations.

He also mentioned oceans issues with elements linked to climate change, such as ocean acidification, coastal erosion, and salination of water sources, as these issues have serious impacts on the economic and social aspects of life in the Pacific, particularly for people living in coastal regions.