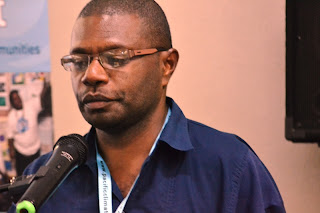 While this model is still at its infancy in terms of its use in the Pacific, the Pacific Adaptation to Climate Change (PACC) project has piloted the new tool in Vanuatu working with the communities on the island of Epi.

Sharing lessons learnt from the project, PACC assistant co-ordinator, Ian Iercet said the Epi project was successful because of the full participation, at all levels, of the local community.

“We ensured that the community participate fully in the decision making process. We also wanted to incorporate traditional knowledge with science to work out the best solutions for the community, Iercet told PACNEWS, a member of the Pacific Media Team 2013.

Building the model was totally the work of the community - students of the local high school, women, village elders and chiefs.

“We used cardboard to cut out contours and traced them using carbon and glued them to form the different layers of the landscape of the island.

“We asked community leaders to identify areas where the impact of climate change is happening and how they’ve addressed these problems using traditional knowledge. We then try and incorporate these traditional form of action with the science, said Iercet.

He said they found that bringing various communities together led to better consensus building on issues that affect their livelihoods.

“At the end of the exercise, community leaders agreed to consider relocation of coastal villages and the high school to higher ground. This decision was by consensus.

“Even before we developed the 3D model for the community, the islanders have used their own hand tools to cut roads in higher ground. We have already surveyed the land and before the end of the year, we will build the road on the island, said Iercet.

To show their commitment, chiefs and leaders in Epi publicly offered their resources such as sand, coral, water and quarry materials free of charge from royalties or any other form of payment, to build new roads for the island.

Chiefs on the island also assured they will not claim compensation for any damage or removal of fruit trees or commercial crops such as kava and peanuts from their land, if the road relocation goes through their land.

“The chiefs of Epi could foresee the impact of PACC project in terms of building their resilience and adaptive capacity far outweighs the compensation in the long run, according to a report on the project by the Vanuatu PACC team.

Iercet said the 3D Modeling is a very cost effective tool that saves money and time as assessments are based on the local knowledge of community members.

Lessons learnt from Epi Island will be replicated in the other outer islands in Vanuatu.