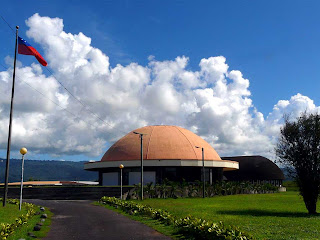 10 July 2013, Nadi, Fiji - The redesign of Samoa’s parliamentary complex has been highlighted as one of the major examples of climate proofing in the region.


Environmental Expert, Professor John E Hay, cited the work on the Samoa’s parliament which focused on building at a higher level as an example of how infrastructure can be made resilient to the impacts of climate change.


“The problem is that the site where the parliament complex is located on the peninsula is actually an old split that had been reclaimed,” said Professor Hay.


“It is a very vulnerable location for the building itself.”


The main threat to the building says Hay is storm surges.


To make the building climate resistance, the ground level was raised so that the building is built at a higher level.


“We don’t only think about resilience for today’s conditions but also for tomorrow and the next decades.


“We need to increase the resilience of the structure of the infrastructure. If those services fail, there are huge consequences on the community and the people,” said the professor.


“The emphasis is on the fact that recovery and reconstruction may take two to three years. So while that take place, Samoa is on hold in terms of developments.


“Think about the individual that rely on the services from infrastructure that will estimate to be really fully recovered and replaced in three years.”


Funding for climate proofing of Samoa’s parliament was provided by the Australia as a gift to Samoa for its 50th anniversary.