Solomons@COP15: Survival is not negotiable-- any political deal must lead to a legal agreement 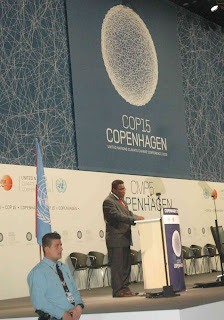 Evan Wasuka, ONE News TV, Solomon Islands
Wednesday 16 December 2009, COPENHAGEN--With time running out for an ambitious outcome at the United Nations climate summit the head of the Solomon Islands delegation says his country is willing to accept a political agreement but only if it contains a time frame to a legal agreement.
Environment Minister Gordon Darcy Lilo says it is apparent by the way talks are going that it’s not likely that a legal agreement can be reached by the end of the week. There is a whole range of distrust and further factions within groups,” says Lilo. The environment minister’s comment comes on the back of moves by the president of COP to lobby developing countries to consider a new text on a proposed agreement.
With talks faltering the COP President backed by UN Secretary General Ban Ki Moon wants a new text to be considered at the expense of other proposals that have already been put forward over the past week and a half. The move though has yet to garner the support from developing countries. The content of the new presidential draft has not been shown to Solomon Islands and other developing countries and will only be seen – when it is tabled in COP – and accepted if there is enough support for the move. Lilo says the best way forward is for all parties to be honest with each other and come out openly and say whether it is a political agreement or a legal agreement that they are pursuing. “If we should have a political agreement they must give a timeframe –
when will we achieve a legal agreement. A process must be defined to get to the legal agreement.” Lilo says the agreement would also need to be binding and contain funding arrangement as prelude to any adaption action. Meanwhile the Solomon Islands in its national statement on climate change (full text below) demanded that industrial nations accept historical responsibility and take-up stringent measures to reduce greenhouse gases immediately.
With no agreement yet on the table and two days left, the environment minister says industrial nations need to take responsibility for their historical actions.
“Its therefore morally and ethically correct with developed countries, historical responsibility they need to adopt a package that will reduce their collective Green House Gases by more 45 per cent below 1990 levels by 2020 and 95 per cent below 1990 levels by 2050.”
Lilo says developed countries further need to also put things right by funding measures to correct past mistakes that have badly affected Pacific Islands countries.
“It is morally and ethically correct to provide new, additional predictable funding …must be over and above current ceiling of Overseas Development Assistance. “
Despite the deals being made at the talks the environment minister told COP that the impacts of climate change could not be negotiated and industrial nations need to take action at Copenhagen. “We have a unique opportunity here in Hopenhagen to take brave actions
and if we do not, climate change will seal our fate for us. “Mr President to us survival is not negotiable.”-- ENDS

Mr President:The Government and people of Solomon Islands join me, in congratulating you on your assumption as President of COP15 and we assure you of our support.

Mr President  :I speak in support of statements made by Grenada on behalf of Alliance of Small Islands States, Lesotho on behalf of Least Developed Countries and Sudan on behalf of Group of 77 and China. Mr President:The defining moment is here and now. After, two years of twists and turns in the negotiations, we have come this far. We began our journey in Bali, negotiated with each other in Poznan and know, here in Copenhagen, that scientific evidence demands decisive action. We must act with a sense of urgency, measured, and in a meaningful and balanced way, to significantly reduce emissions of all harmful greenhouse gases.

Mr President: As a small islands developing state with least developed countries status, outcomes of Copenhagen will shape our future. We therefore would like to see an ambitious two distinct tracks legally binding agreement on the Kyoto Protocol and the Long-term Cooperative Action.

We note that AOSIS has presented a legally binding Protocol which could be used as a basis for discussing a comprehensive outcome. We continue to encourage a transparent, inclusive party drive approach. Our process between now and Friday must be founded on trust and good faith, with a clear defined path to achieve our common goal of sealing the deal.

Mr President:The preamble of the United Nations Framework Convention on Climate Change acknowledges that [quote] ‘the largest share of historical and current global emissions of greenhouse gases has originated in developed countries’.

It is morally and ethically correct, to provide new, additional and predictable funding. This new, additional and predictable funding must be over and above current ceilings of Overseas Development Assistance. New fast track financing is welcomed, though we would like to see this managed in a sustainable manner within the Convention and Protocol frameworks.

Mr President:Ocean is pivotal to the existence of humanity in small islands developing states. Ocean is our friend and provider of our daily needs. We live and play with the ocean and it supports our livelihood. With the passage of time, the role of ocean has never diminished for us.

We have taken a number of adaptation and mitigation initiatives including the Coral Triangle Initiative which is a six country partnership on safeguarding the world’s richest marine ecosystem. Today I launched a community based REDD project which aims to conserve the largest unlogged tropical island in the Pacific.

Mr President:Can we reverse this decline and preserve humanity on planet earth? Yes, we can!

Mr President:Climate change knows no boundaries. We can not create any weak links within the international system. Solomon Islands welcome interest shown by those countries operating outside both the frameworks of Convention and the Protocol to join the global fight against negative effects of climate change.

Mr President:We have heard your call for flexibility and compromise in these negotiations. However we can not negotiate with science.

We are convinced that science should drive our decisions and science and local observations tell us that it is time to act now.

To stay alive we need long term stabilization of green house gas concentration well below 350 parts per million and global average temperature to be limited to well below 1.5 degrees Celsius.

Mr President:We agree. Time is up. The window of action is fast closing and the futures of our people; born and unborn, abled and disabled are in our hands. We have a unique opportunity here in Hopenhagen to take brave actions and if we do not, climate change will seal our fate for us. Mr President, to us, survival is not negotiable.