Oxfam Hears from the Vulnerable

Rachna Lal, USP Journalism, Climate Pasifika
Copenhagen, 15 December - Many people present at the COP15 in Copenhagen from different parts of the world have a story to tell about their experience with the effects of climate change.

Oxfam international organized the International climate hearing event to call upon people to talk about the adverse effects of climate change they are faced with.

“All these people out there have one goal and that is to have their story about their daily struggles due to climate change out in the public,” said Archbishop Emeritus Desmond Tutu. (Pictured below) 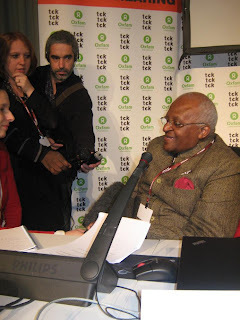 “People have been protesting on a daily basis here in Copenhagen for those whom they do not even know yet are feeling the strong brunt of climate changes.  It touches my heart to see such goodness in these people.”

The outcome of the conference for the Archbishop here in Copenhagen is the difference between survival and doom.

“Those hundreds of people speaking here in Copenhagen are the voices of billions who could not be here.  These people are losing everything as natural disasters are affecting them glaciers are melting away also salt water affecting their food and water resources and supply,” he said.

He reiterated what has been in the air since the beginning,  unless a legal agreement is signed the disaster already in progress will worsen and destroy the heritage and livelihood of all the vulnerable people of small developing and less developed countries.

Kiribati born Tuvaluan, Pelemise Alofa, told her heartbreaking story to the gathered crowd about the situation back in her homelands.

“Our islands are sinking and we need people to understand that COP15 means a matter of life and death for us and so it is not a business deal nor can it be negotiated,” she said.

It is believed that people from the Pacific have a big heart and Alofa was here to spread that love here at the COP15.

“We do not have mountains and rivers back home yet we know we are meeting people stronger then us and my message to those strong people is to learn to love and care about other people like we do.” 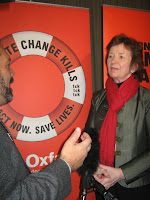 “World’s poorest people have the least input in carbon emissions yet they are the ones who are badly affected and the industrialized countries must reduce their emissions by 40 percent to secure the livelihoods of these people yet we are seeing such less commitment from countries,” she said.

She demanded the need for good leadership in order to end up with a realistic commitment at the end of the conference.