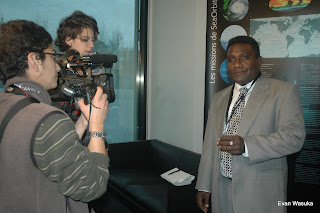 Copenhagen, 15 December - With 70 per cent of its imports bill going into fuel to supply power to its population, the Solomon Islands is more than keen to become energy efficient.  After all, the Solomon Islands Electricity Authority as a state owned body spends millions of dollars on supplying fuel to the public.

The delegation leader at the conference, Gordon Darcy Lilo says it makes environmental and economic sense to switch to renewable energy sources.  On Tuesday he held talks with the Renewable Energy and Energy Efficiency Partnership (REEEP) body and pledged that the government would look at ways to promote energy efficiency.

"We'll look at tariff reductions on new energy efficient technology and promote energy efficiency...this will save a lot on our GDP pressure," said the environment minister.

currently have a project under submission to REEEP for an energy audit on power usage in the .  The aim of the 100,000 Euro project proposal is to map out the consumption use of consumers in the .

"The data collected will be used to help the government draw up regulations on energy, such as those for energy consuming appliance," says Solomon Islands Energy Deputy Director Nixon Kua.

He says this will be beneficial in terms of cost cutting and for the reduction of emissions.  REEP is expected to make a decision on the project proposal by June.