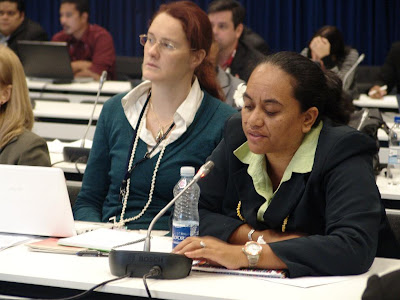 Copenhagen, 12 December - The Cook Islands is vacating a seat, it held for three terms, on the Expert Group on Technology Transfer within the United Nations Framework Climate Change Convention (UNFCCC).

Climate change negotiator and Environment’s International Manager Tania Temata says that the Cook Islands, through Tom Wichman, served on the Expert Group for three terms. He was nominated by Government as an expert from the Pacific to represent Asia and the Pacific region on the group.

“That seat has now come up for re-election. Last year we received a counter proposal from another Asia-Pacific country for this position, and given that our Asia Pacific Group is such a huge group, Cook Islands will not be seeking for re-election,” says Temata.

"Given the length of term the Cook Islands has served on the EGTT, it was only appropriate that other Pacific Islands be given the opportunity as well.”

The Expert Group on Technology Transfer (EGTT) was established with the aim to enhance the implementation of this framework and to advance the technology transfer activities under the Convention. Over the last five years, the work of the EGTT has become results oriented, with the production of targeted and instructive products that Parties can use as they formulate their specific climate change mitigation and adaptation technology strategies.

Technology needs and needs assessments are a set of country-driven activities that identify and determine the mitigation and adaptation technology priorities particularly of developing countries.


"The Cook Islands is lucky to have someone like Tom Wichman, who has a passion for simple technology development and innovations for small islands, and his representation on the EGTT was widely supported by our Pacific neighbours,” says Temata.

Elections will be carried out at the UN climate change negotiations in Copenhagen.