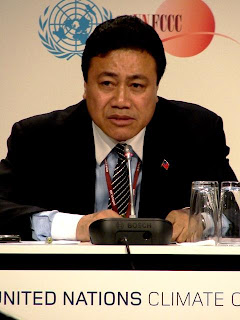 The Pacific delegations may be thinking it, but it took Samoa's Ambassador to the UN to voice a growing pressure on COP15 to deliver.


“My simple message is this. We are not here just to make up the numbers. We are here because we need action now. Let us use science as the basis of all this so that people don't get off scot-free in terms of their responsibility. We appreciate the assistance given by our development partners, but at the end of the day we happen to share the same globe. As I said we call it our heritage, and our home, even though some may regard it as an investment and a disposable asset.”


So said Samoa's ambassador to the United Nations Aliioaiga Feturi Elisaia during a COP15 Pacific press conference, where he called on developed countries and major polluters in the developing world to act now in reversing the impacts of climate change.  Feturi (pictured) said there is no time to wait for change.

"Some are talking about saving the planet for future generations, but what about us who are here now,? We are not going to theorize about something that is going to happen in the future, maybe for some countries, but definitely for the Pacific and definitely for Samoa."

Feturi presented alongside Fiji, Solomon Islands and the Federated States of Micronesia . He said the islands do not take the negotiations lightly.
"Samoa's (delegation) took over two days to get to Copenhagen, not because we want to make up numbers for the quorum so that the meeting can start. We are here because science instructed us to be here."

The UN Ambassador said developed countries should not underestimate the severity of the situation for Pacific islands.
“We have had two cyclones, and we have had to get loans from the World Bank to try and ensure that we can mitigate against some of the impacts of climate change. This is not something that we are trying to convince ourselves, because it is happening. That is why we have following the negotiations in good faith, to the extent that a lot of our Leaders will be arriving here next week.” Feturi said facts speak for the case of Samoa and other Pacific island countries feeling the impacts of climate change.

“Science instructed us to act now. Not next week or next year. Why, because we share the same planet, and for Samoa, we call this planet our heritage, for some they call it an investment or probably a disposable asset.”


Feturi touched on financing of adaptation and mitigation in the Pacific, emphasising on the need for fair support by developed nations.

“I just want to make the point that a lot of people are talking about immediate finance. I think there is a tendency in these negotiations to play with words. For us English is a second language, but we think we can understand what parties are trying to say. The immediate finance for the next three years or so, that's all very well and we appreciate any additional funds on the table. But the question is, is that sufficient?”
The Ambassador emphasised the need to stick to the facts when it comes to financial responsibilities. “The science has dictated that we try and repair the planet because of the damages that man has already induced or done, though we need a lot more than some of the numbers that have been thrown around. "
"It is imperative that the international community should not lose sight of the plight of the Pacific islands states, including least developed countries and also small island developing states in terms of finances.”Feturi said sustainability and independence is key: “It is all very well for Governments to say that you are going to get so much money, but what hasn't been established is how much of that is going to come from the private sector. Government don't have control of the private sector. They will depend on the goodwill of people in that sector. So there is an element of uncertainty and we cannot play accordingly. “

He called on world leaders to take their responsibility seriously and recognize that small islands are also contributing to their own welfare: “It is important for the international community to know that we are not just asking for handouts. We are doing things individually within our respective countries within the resource constraints that we face. At the strategic level, we are ensuring that climate change is integrated into our own development planning.”
Feturi did not fail to note the value of including grassroots communities.
“We are also strategising at the community level through projects because at the end of the day, they are the people at the forefront. They are the people who will bear the brunt of all the impacts of the climate change that are being felt in the region.”