Hi, hi! Denmark rolls out the red carpet for COP15 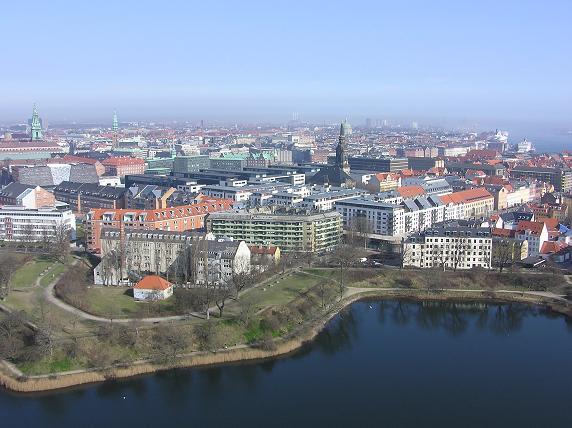 10 December 2009, Copenhagen: Stand in any spot of the Bella Centre in Copenhagen and it's hard not to feel overwhelmed by the sense of history that's going to be made here next weekend. Not that standing is much of an option when you're surrounded by the sheer scale and size of this event, and the reason why the world is here. The clamour of conversations, languages and people can be overwhelming.

But you only have to look up to breathe easy again. The greenery and displays offer a handy mental escape route and you can take in the panorama of 'clean energy' outside, where the Bella Centre's famous wind propellors do their rhythmic turn,providing energy to help run this global conference landmark. Courtesy coatroom attendants swap tiny claim tickets in exchange for your armfuls of coats, scarves and winter gear. Free internet and skype is everywhere. A flash of our delegate badge gets us free travel on all public transport. Heavily subsidised meals are washed down with as much free cooled water and dark chocolate as you can take with you. And people here say hello -- and goodbye, with the same infectious 'hi, hi'. Even if it is mid winter and the weather is dreary, Copenhagen, dubbed Hopenhagen for the two weeks it will host the COP15, has put on its best smile for Denmark's biggest ever international meeting.

And the country has definitely rolled out the red carpet, with a price tag to match. Security measures and the police are costing much more and are likely to be as much as or double the 100million USD budget for logistics. With more than 34,000 interested participants --
some 18,000 registered, and a conference venue able to hold 15,000 delegates, the question of who works behind the scenes to put it all together springs to mind. The UNFCCC secretariat is a hive of off-limits activity to media queries, but a stroll across the connecting bridge in the central hall leads us to the Denmark delegation offices which include a suiteof offices on-site for the host country delegation, led by Prime Minister Connie Hedegaard. Svend Olling of the COP15 logistics department in Denmarks Foreign Affairs Ministry is trying to ensure
every one gets what they need to comfortably focus on the task at hand: deciding on climate change goals which many already agree will ultimately decide Earth's future. Ensuring Denmark hosts its biggest ever international event smoothly has been his raison d'etre for the last two years. In 2007, Olling led a small team to Canada for a three day mision to find out what worked and lessons learnt from that country's hosting of the 11th COP.

To finally make that translate into this weeks globally simulcast opening ceremony was an emotional moment. "It was a big moment, to realise that what we had been working towards for the last two years had finally come to this reality. I had a lump in my throat and a tear in my eye," he smiles. He gestures with his hands to sum up the experience. "This was sudenly it. The dream of Denmark welcoming the world to Copenhagen had come true." From an inner circle of 20 to an outer ripple of tens of thousands, hosting a conference on sustainability in a sustainable way has also been a strong focus for the marketing of this event. Managing the combined carbon footprints of the tens of thousands who are supporting or attending COP15 is no mean feat. Infrastructure has only been one part of the conference logistics. Denmark has been keen to profile itself as a nation hosting a global meeting with an eye on the environment. Whether its the wind-powered aspect of the venue, or the decision to put the cost of conference packs into scholarships for participants instead, COP15 has set some groundbreaking standards in place. More than half of the food and drink served here is organic, while coffee and tea products are all fair-trade.


The last major international summit hosted by Denmark was also in Copenhagen in 1995 for the World Social Summit. "That brought together 10,000 people for one week. Now we are talking about more than 20,000 people in two weeks so it's absolutely the biggest scale we have ever seen," says Olling.

"Outside the core group of 20, we have generalists, specialists, hotel, transport, defence, police, security and focal points everywhere: even the Bella Centre has its own focal point."


Having Parliament onside to approve the massive budget involved also proved helpful when carving up the logistics work. But as for hosting a conference on a multimillion dollar tab?

"There is an understanding in Danish society that the money is well spent because it's coming back. Its coming back in tourism, in increased economic activity -- which creates more taxes, in products made in Denmark and branding of Denmark as a destination," says Olling.

I ask him how he manages to stay on top of it all and he shares the top tip of his last two years. Through the multi-tasking and number crunching, the coordination and meetings towards COP15, the one clear resource which has made hosting and logistics go so smoothly is people, says Olling."The hiring process began with two people and grew from there as we distributed tasks and worked through our enormous list of of what to do to get the ball rolling. The most important thing is to have the right team to work together in the right spirit. That was enormously important."