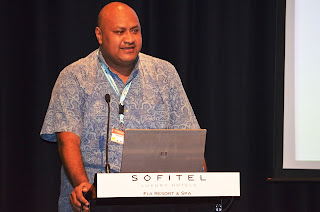 9 July 2012, Nadi, Fiji - Climate change and disasters are the two most biggest sustainable development challenges for the Pacific region.


In the Pacific, there have been positive progress in dealing with these development challenges, said Sefanaia Nawadra, the director Environmental Monitoring & Governance (EMG) Division for the Secretariat for the Pacific Regional Environment Programme (SPREP).


Nawadra said governments have made commitments to strengthen development effectiveness through peer reviews, citing the Cairns Compact as the best example of that commitment.


At the highest level, sustainable development and climate change are managed by central government. There is also an increase in government pledges to shift to renewable energy and significant commitments to ocean conservation.


While the Pacific region has progressed in dealing with these two issues in some integrated way, the reality remains that they are dependent on overseas aid for their national development priorities.


“The proportion of contribution of ODA to GNI has generally increased in Pacific Islands Countries. With this, there are the challenges of donor harmonization, aid effectiveness, and aid dependency which are very difficult to manage, said Nawadra.


“At the same time, there is a greater dependency on fossil fuel in the Pacific. Human capacity is significantly limiting. Coupled with NCD crisis, migration of skilled workers, youth bulge in population are realities in the Pacific.”


Pacific Leaders have called for the rationalisation and integration of many of the parallel processes that collectively set the global agenda. These are the Millennium Development Goals (MDGs) which expire in 2015 and the Rio+20 proposed Sustainable Development Goals (SDGs).


“Many of our small island countries struggle to deal with the multitude of international agreements, policy commitments and related implementation and reporting requirements.


For the Pacific, the third global conference for Small Island Developing States conference in Samoa in 2014 will help distill Pacific priorities for the new Post 2015 agenda


“But we should also include missing targets in the post-2015 agenda, said Nawadra


The SIDS Conference hosted by Samoa in 2014 will be convened from 01-05 September next year.