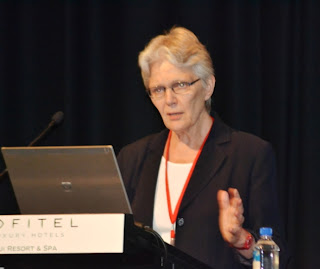 8 July, 2013 Nadi, Fiji - The head of the United Nations Office for Disaster Risk Reduction (DRR) has commended the Pacific initiative to develop a regional plan to integrate disaster risk management and climate change.


Margareta Wahlstrom said the proposed regional strategy sets a precedent for other regions of the world to follow.


“The development of an integrated Pacific Regional Strategy for Disaster Risk Reduction and Climate Change into a single overarching policy framework by 2015 is an ambitious and necessary framework that will benefit millions of people and avert the loss of hundreds of millions of dollars in economic losses.


In the Pacific, Samoa and Fiji recently suffered millions of dollars from Tropical Cyclone Evan that struck the two island nations in December last year.


“Samoa suffered in 29 percent loss to its GDP in 2012. Fiji suffered two grave floods with a total damage of FJ$200 million in a period of six months. The major losses to Fiji were for bridges, roads, agriculture and private homes, said Wahlstrom.


The head of the UN Disaster Office used her visit to Fiji to see first-hand some of the work disaster risk management work implanted by the Fijian Government.


‘”I have seen how Fiji is rapidly learning from the 2012 disaster and putting in place plans through an integrated rural development programme for mitigation of disaster losses through flooding.


“I was very impressed by this programme and its potential for addressing this important annual risk to Fiji’s population, said Wahlstrom.


Right now in Marshall Islands, Wahlstrom said, 6,700 people are in need of safe water due to drought and acute water shortage.


Outcomes of the regional integrated strategy, now called the ‘Roadmap’ will feed into regional position on global discussion on the Hyogo Framework for Action (HFA) and the Millennium Development Goals (MDGs), which both expire in 2015.


“2015 offers us, through our parallel but not well integrated processes to achieve a more unified direction for sustained and resilient development agenda that must be a shared agenda amongst all countries.


“The MDG 15 years agenda will come to a close in 2015 and there is work going on for the consideration of countries in a new development vision that may be expressed in sustainable development for all (SDGs) valid for all, explained Wahlstrom.


Sharing some findings from the 2013 Global Assessment Report on DRR recently launched by Secretary General, Ban Ki Moon, the UNISDR head encouraged more collaboration in the Pacific between public and private sector in reducing risks and losses.


“How much the private sector feels the damage depends on government policies. However, as governments are unable to t pay for increasing damages and losses, its critical to engage businesses in preparedness and mitigation of losses, said Wahlstrom