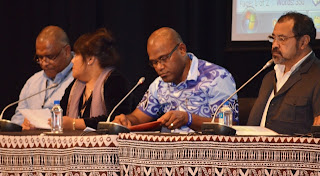 9 July, 2013, Nadi, Fiji - Good science must build on traditional knowledge and it must be made available to those who need it on the ground such as managers dealing with the impacts of climate change said Esala Nayasi, Director, Political and Treaties, Ministry of Foreign Affairs and International Cooperation for Fiji also the Chair of the Pacific Climate Change Roundtable.


He told the Joint Meeting of the 2013 Pacific Platform For Disaster Risk Management & Pacific Climate Change Roundtable meeting in Nadi, that this was one of the key issues raised at the PCCR last week.


The PCCR is supported by the Government of Switzerland, a key partner for the Secretariat of the Pacific Regional Environment Programme (SPREP), and also supported the 2011 and 2009 PCCR events. Support is also provided by Australia, Germany and the European Union.


“It is important to get the balance right between adaptation and mitigation, and also balance within adaptation between infrastructure based options and nature based options, with a need to increase our focus on practical ecosystem based approaches such as we have heard about in Choiseul province in Solomon Islands. This focus enables win-win outcomes on climate change and nature conservation.”


Other issues raised at the PCCR include the need for heightened urgency on sea level rise and action at international and national levels to reduce greenhouse gases.


"We are the smallest emitters of greenhouses gases but the first to be impacted."


On the integration of climate change and disaster risk management, Nayasi said this had to occur at national level to work.


"In order for the integrated strategy to be robust, the process by which we get there must be country driven. In other words it must be led by the countries themselves."


Recommendations from PCCR to the Joint Meeting:


• To recognise that adaptation to the adverse impacts of climate change remains a key priority for the region;


• To acknowledge and take into consideration the lessons learned from the implementation of the Pacific Island Framework for Action on Climate Change (PIFACC) and other
relevant instruments;


• To maintain the leadership and country-driven approach by Pacific Island Countries and Territories (PICTS);


• To recognize that there are commonalities between aspects of climate change and disaster risk management and that efficiencies can be generated through joint efforts;


• To further recognize, there remain needs in climate change and disaster risk management that should be considered and addressed through separate processes ;


• To draw on lessons from national, sub-national and community level experiences in integrating DRM and CCA, such as the Joint National Action Plans (JNAPs) and national
development strategies;


• To urge development partners to provide continued support to the Roadmap process;


• To recognise the value of joint meetings for the Roadmap.