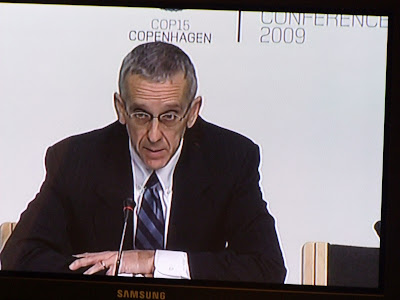 Friday 11 December 2009, COPENHAGEN -- The United States says the push by the Alliance of Small Island States (AOSIS) to limit global temperature to well below 1.5 degrees Celsius is ‘not in the realm of what we can agree to’ here in Copenhagen. Todd Stern, (above) the US chief climate change negotiator told the international media that any agreement expected from Copenhagen must focus on the two percent degree Celsius ceiling.
“I don’t want to criticise the position of small island states but the U.S maintains the two percent and we see it as an initial step.”
“We need to keep a close eye on the sciences and if it’s ramped up later, then we can revise.
Mr Stern said,


“If we do a deal here, two percent will be good.”


Since arriving in the Danish city a few days ago, Mr Stern has met with a number of the groupings within the United Nations Framework Convention on Climate Change (UNFCCC) to discuss the U.S position.
“I spent some time talking with folks from AOSIS. Nobody has more legitimate concerns than them.
“I see that the proposed draft from the chair of the Ad Hoc Working Group on Long Term Co-operative Action under the Convention (AWG-LCA) has a review period to take place in 2016.
Item 8, under the shared vision for long term co-operative action, the draft proposes a comprehensive review, which includes an evaluation and update of the long term global emissions reductions.
“The first comprehensive review shall take place in 2016 and shall be informed by the findings of the fifth assessment report of the Intergovernmental Panel on Climate Change (IPCC).”
China, on the other hand showed sympathy towards the AOSIS proposed Copenhagen protocol but did not want to go into commitment details. 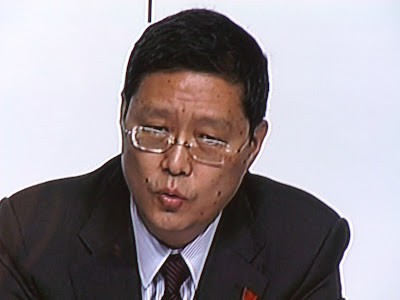 Instead, its vice foreign affairs minister, He Yatei (above) spoke of the need for developed and rich nations to deliver funding commitments, required under the Kyoto Protocol. We understand the unique concerns of small islands developing states and we have great sympathy for them. Their concerns are the same in principle to ours. There is lack of implementation by developed countries to the Kyoto Protocol. Apart from the European Union, all other developed countries under the Kyoto Protocol have not met their commitments.
Mr He said, for small island countries, climate change means their survival as a nation.
"UNFCCC executive secretary, Yves de Boer was upbeat about the draft text by the chair of AWG-LCA. The proposed draft paper captures the beginning of a climate change framework.


He clarified that numbers have not been finalised in the draft as the negotiations will put some flesh into the text.
On the Tuvalu proposed amendment to the Kyoto Protocol, Mr de Boer said there have been a number of formal and informal discussions on the proposal.
“Tuvalu wants to be sure its proposal does not disappear. It’s the same with four other groups that have submitted amendment proposals.
Responding to the draft negotiating text, Kim Carstensen, leader of WWF Global Climate Initiative said the text provides a basis to make the right political decisions.
“It contains many gaps, exposes rifts but also clearly shows that an agreement is possible.”
“The gaps are now visible and need to be filled by political will and concrete financial commitments. We still don’t know how much money there will be and where it will come from.”
Mr Carstensen said countries need to fill these gaps as soon as possible.
“Copenhagen can only come to an agreement if negotiations will be fair, open and transparent. While we understand that a large number of parties were not happy with the way this text has been proposed. We believe it is important that the text is now there and that its content has the potential to unlock the stalled talks, said Mr Carstensen.
Also proposed in the draft text is the provision for the reduced emissions from deforestation and degradation (REDD).
Under enhanced mitigation and its associated means of implementation, its been proposed that developing countrie parties may undertake mitigation actions, which includes REDD.
Papua New Guinea and like minded countries, who are members of the Coalition of Rainforest Nations, have been pushing for the inclusion of REDD as a financing scheme within the Clean Development Mechanism (CDM).-- ENDS