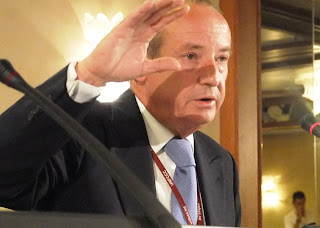 By Makereta Komai for Climate Pasifika in Bonn, Germany
09 June 2010, Bonn, Germany ---- After close to four years at the helm of the United Nations climate change body, Yvo de Boer has completed his term, six months after the failed talks in Copenhagen.
And before leaving Bonn on 01 July, the Dutch national shared his final thoughts with negotiators Wednesday at special joint session of the two technical subsidiary bodies.
Using what he called a World Cup imagery, de Boer said, “We got a yellow card in Copenhagen and the referee’s hand will edge toward the red one if we fail to deliver in Cancun and beyond.
A red card is definite if rich countries fail to commit to stringent pledges – an 80 percent goal for the middle century is not enough.
“I hope that I have not lost too many friends with this statement and will not lose more.
De Boer said deciding what each and everyone will contribute to this requires more than one round of negotiations.
The current pledges from industrialised countries are not sufficient to bring us into the 25-40% range that the International Panel on (IPCC) projects in its most ambitious scenario.
“Having said this, we cannot afford to postpone more stringent action much longer. As things stand now we will not be able to halt the increase of global greenhouse gas emissions in the next ten years.
With the 2 degree, the world is in danger, and as a result the door to a 1.5 degree world is rapidly closing, said de Boer.
There is strong consensus that a legally binding agreement is the preference of all the Parties but the outgoing climate change chief reminded negotiators that ‘legally binding’ mean different things to different people.
“This is good, because it offers an opportunity to define the concept in much broader terms than internationally binding rich country targets alone.
“Legal rigour and ambition are, in and of themselves, not a sine qua non. Rigorous sanctions combined with a lack of clarity on tools and incentives are more likely to engender caution than bravery.”
De Boer exhorted Parties to allow for room for discussion to complement negotiation.
“More often the focus is on interpretation of stated positions rather than debate to understand the nature of underlying interests.”
On the expected outcome for Cancun, the departing climate change diplomat said there needs to be clarity on ‘what is technical and what is political, what political decisions are needed to make technical work possible and how technical talks should be effectively organised.”
“These are not issues you can agree on with 15,000 people in the room. A clear mandate to work in a smaller setting and report back to the Conference of the Parties (COP) is enough.
Maintaining his confidence in the UNFCCC process, de Boer told over 1,000 delegates that packed the conference room at the Maritim Hotel that, ‘I am confident - You did it in Rio. You did it in Kyoto. You did it Bali. You will do it again in Cancun.’
His departure takes effect July 1, five months before 193 nations are due to reconvene in Mexico for another attempt to reach a binding worldwide accord on controlling greenhouse gases. He is known to be deeply disappointed with outcome of the last summit in Copenhagen.
He is being replaced by long time Costa Rican climate change negotiator, Christiana Figueres.

Ms Komai will be covering the Bonn Climate Change negotiations from 31 May – 11 June 2010, thanks to support from Secretariat of the Pacific Regional Environment Programme (SPREP) and the World Wide Fund for Nature (WWF). She will provide daily coverage of the negotiations via PACNEWS and the SPREP website www.sprep.org, the climate pasifika blogspot, http://climatepasifika.blogspot.com and the PINA Green page http://green.pina.com.fj/