By Makereta Komai for Climate Pasifika in
08 June 2010, , --- says it won’t raise expectations for a legally binding climate change agreement at the end of the year in but will await the outcomes of the current negotiations to see what practical conclusions can be reached.
“Be prepared, not everything will be solved in Cancun, said ’s climate change top diplomat, Ambassador Luis Alfonso de Alba while briefing international media here Tuesday.
There are three options for a final outcome in , said the Mexican Ambassador, who is meeting informally with all negotiating groups in preparation for the Conference of the Parties (COP) in December.
“I can tell you that we may not have a single treaty in .  One option is to have Treaties or Protocols.  The United Nations Framework Convention on Climate Change Convention allows for two or three protocols. There is the Kyoto Protocol and we can have an additional instrument that complement it, said Ambassador de Alba.
The other is to have a single treaty that will replace the Kyoto Protocol or have a combination of Treaties and Decisions by the Conference of the Parties.
Ambassador de Alba said Cancun doesn’t want a repeat of .
“We probably aimed too high in . It was evident that we could not achieve an agreement because we arrived with a set of documents that was not sufficiently mature to lead to an agreement.
“The final text was negotiated late in the process in . We want to change that in . 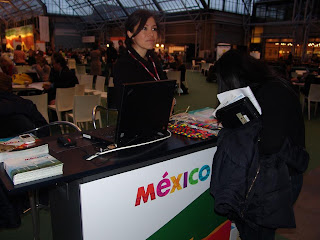 “We are not going to aim for a deal at the last minute by involving heads of states. That is why we are negotiating here before the ministerial session.’’
He said the media should refrain from describing the Mexico COP 16 meeting as a summit.
“It’s not a meeting that we should expect the attendance of high number of heads of state and leaders, which is in line with the level of the Conference of the Parties. was the first that was attended by a large number of world leaders.
Ambassador de Alba said the current round of negotiations underway in , and two more scheduled in August and October would be good indicators of what can be achieved in .
“We are trying to identify issues in each of the negotiating chapters and see how much progress can be made here on the critical issues of adaptation, mitigation, technology, finance, forests. REDD. We are obviously following the two track process under the Bali Roadmap.
To push the process forward, has had informal meetings with negotiating groups, including the Alliance of Small Islands States (AOSIS).
In his briefing, Ambassador de Alba reiterated his government’s preferred position that a legally binding agreement be reached in , but details need to be worked out including the definition of ‘legally binding’ and what specific items need to be legally binding.
AOSIS in response suggested that legal form was a 'crunch issue' that should be addressed formally in an open and transparent manner as soon as possible and not wait until August session.
“This is to avoid waiting to address this issue at the last minute in Cancun should Parties need time to convert potential decisions into a legal instrument, said an AOSIS briefing paper.
Ambassador de Alba said there have been a number of informal sessions in Mexico wit Parties and the two chairs of the ad hoc working groups to try and advance discussions on financing and other substantive issues. We’ve also visited a number of countries in different continents and attended a number of important multilateral meetings to discuss our expectations. 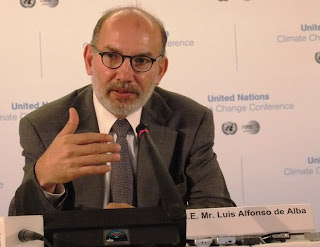 “This strategy involves different levels of decision making process. We started with the consultations on the level of negotiators and we will now report to the ministerial meeting, as a follow up to the decisions reached here.
In , President Felipe Calderon has taken the lead in the preparations for COP16 meeting.
“He is personally engaged in meetings at his level and is video conferencing with other world leaders to keep up the momentum on climate change, said Ambassador de Alba.
will host the UNFCCC Conference of the Parties from 29 November – 10 December.
Ms Makereta Komai will be covering the Bonn Climate Change negotiations from 31 May – 11 June 2010, thanks to support from Secretariat of the Pacific Regional Environment Programme (SPREP) and the World Wide Fund for Nature (WWF). She will provide daily coverage of the negotiations via PACNEWS and the SPREP website www.sprep.org, the climate pasifika blogspot, http://climatepasifika.blogspot.com and the PINA Green page http://green.pina.com.fj/