Influential Climate Action Network to set up office in the Pacific

By Makereta Komai of Climate Pasifika in Bonn, Germany
06 June 2010, Bonn, Germany – Moves are afoot to set up a Pacific arm of the influential Climate Action Network (CAN), a worldwide network of about 500 non-governmental organisations across the globe that promotes action on climate change. 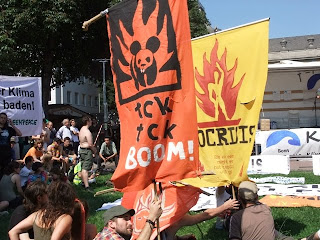 Initial ground work discussions have been advanced here in Bonn during the climate change talks.
Leading the Pacific charge is former attorney general of the Federated States of Micronesia (FSM) and climate change activist, Marstella Jack.
“I am part of the FSM government delegation and that’s the beauty of climate change negotiations for us in the Pacific. It brings the government and civil societies together to be on the same page, Jack said.
Cook Islands and Tuvalu are keen to set up their climate action network organisations, said Jack.
“Now we have Kiribati expressing interest to join us. They’ve given us the go ahead to set up what we call a regional node. It’s just our laid back attitude in the Pacific that we are taking our time to set up.
“I have approached Marshall Islands and a lady in the delegation is keen on the idea. If we get the Pacific node up and running, new organisations can then join us, said Jack.
CAN International has had to revise its position on the global temperature to enable membership from the Pacific
“Last year we had some difficulties, the overall position of CAN was 2.0 degrees average in global temperature and as you know we were advocating for 1.5 degrees. That has changed now.
“After the release of many scientific reports, CAN International has now realised that they need to readjust their position.”
A charter of the association for the new climate change NGO in the Pacific is now ready to be registered.
“We are looking at registering it in Tuvalu. Once that is done, we will need to look for funds to get a co-ordinator on board. At the same time, we should consider applying for observer status at the Pacific Islands Forum”, said Jack.
Kiribati, Jack said, has also expressed its interest to join CAN Pacific.
“We have enough right now but it’s better to have more from the rest of the Pacific Islands so that we become inclusive and representative of the whole region, more so the low lying islands of Marshalls, Tuvalu and Kiribati. We want them to be involved because they need to be the ones carrying the torch for us in the region.”
Climate Action Network Pacific will be focused on climate change and its cross cutting issues, said Jack.
“This is the first time that we have to come together to say enough is enough. We need to be focused, strong and build the capacity of members. Climate change demands us as NGOs and governments to come together to demand action from the polluters.
CAN members promote information exchange and coordinate development of NGO strategy on international, regional, and national climate issues. It has seven regional offices which co-ordinate these efforts in Africa, Australia, Central and Eastern Europe, Western Europe, Latin America, North America, South Asia, and Southeast Asia. Its vision is to protect the atmosphere while allowing for sustainable and equitable development worldwide.
Ms Komai will be covering the Bonn Climate Change negotiations from 31 May – 11 June 2010, thanks to support from Secretariat of the Pacific Regional Environment Programme (SPREP) and the World Wide Fund for Nature (WWF). She will provide daily coverage of the negotiations via PACNEWS and the SPREP website www.sprep.org, the climate pasifika blogspot, http://climatepasifika.blogspot.com and the PINA Green page http://green.pina.com.fj/