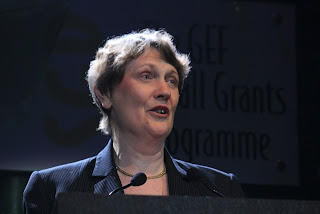 The centre was launched at a side event in the final day of Rio+20, as organizers confirmed the conference’s status as the biggest UN meeting in history with the attendance of over 45,000 participants.

Ms Clark says the centre will take forward the gains made on sustainable development at Rio.

“Rio+20 ends today but the journey to sustainable development goes on. We all know we have to do better than we’ve done in the last 20 years.

“How do we do better – one way of doing better is to know how others are doing better. To share experiences, to share ideas, to share knowledge to actively promote cooperation.”

Brazil’s environment minister Izabella Meixeira said the setting up of the centre in Rio de Janeiro would be one of the legacies of the Rio+20 conference.

“Our universities, various sectors of society, the business community and everyone here wants to work hard for this legacy,’’

Brazil has already secured $5 million in seed money for the centre’s operations.

On the outcome of the Rio+20 Ms Clark said she agreed that there are concrete steps made in oceans, the issues of fossil fuel and fuel subsidies.

She said the onus is now on countries to build low carbon and climate resilience societies.

In the end, action must be taken by, leaders, politicians, civil society, businesses so that they go away from here inspired, she added.

“We go away from Rio with a lot of work to do.”