By Evan Wasuka, One Television, Solomon 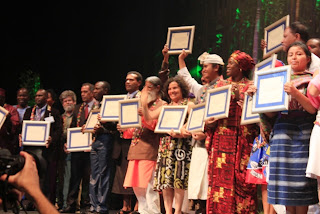 Allan Tipet Bero of the Tetepare Descendants Associations says women because of their role in society their maternal responsibilities are in the right position to lead the way in conservation.

“Conservation affects the well being of families, it is the women who care about what is happening around them and their families.

“It is the women who struggle and form associations to find solutions to feed and educate their families,” he said.

Mr Bero says this was evident at the awards, since most of the recipients were women.

The Tetepare Descendants Association was one of 25 projects selected from 800 entries from around the world recognized in the Equator Awards at Rio de Janeiro, on Wednesday.

The UNDP funded awards are aimed at promoting local solutions for sustainable development.

“The way forward is that we in the community must take the front line in the fight to ensure sustainable development.”

The Tetepare Descendants Association looks after Tetepare Island, the largest uninhabited islands in the South Pacific that has earned global recognition for its unique biodiversity and the variety of plant and animal species on the island.

“We’re still haven’t found out all the species of animals on the island and we are encouraging researchers from around the world to come and study the biodiversity there.”

The island has been uninhabited for almost 200 years with the association having to fight off interest by logging companies to harvest the island’s forests.

Mr Bero says descendants of the original landowners were reluctant about the benefits of conservation but over time have been convinced by the success of the Tetepare Islands.
“Conserving biodiversity is very important to our livelihood. It empowers the community to manage their own resources to improve their lives.”
The association was formed in 2002 and now provides employment for the local community, scholarships and community funds for its 3000 plus members.

Eighty students from the community are now studying on scholarships at secondary school, vocational institutes and at tertiary level.

“What the Tetepare Descendants Association has done has had huge impact in global conservation.

“Although we’re a small country their success has put us on the map in terms of conservation and sustainability.