His reaction comes as ‘consensus’ looks difficult due to stalled negotiations in the Danish city.

"Otherwise, the global climate summit is at risk of "failure", the Prime Minister told Sky News. 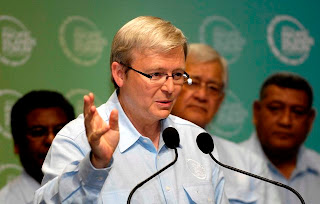 “I think, to land a strong agreement in Copenhagen we are going to have to see more compromise all round - from the big developed economies as well as the emerging economies... We've got a lot of work ahead of us,” the Prime Minister said.


Mr Rudd, who has been appointed a deal-brokering “friend of the chair” by the Danish Prime Minister Lars Løkke Rasmussen, has been forced to head to Copenhagen without parliamentary approval of his proposed carbon trade laws.