Copenhagen, 15 December - Famous leaders have graced the halls of the Bella Centre for the COP15 these past few days, but only one has caused hundreds of journalists to go running for tickets to enter his

Arnold Schwarzenegger the Mayor of California, but better known in our parts as the Terminator addressed a handful of COP15 participants in Copenhagen this afternoon.

"It is the individuals, the civil societies, the sub national leaders and the people that make a difference, who can push to make changes," Schwarzenegger said. 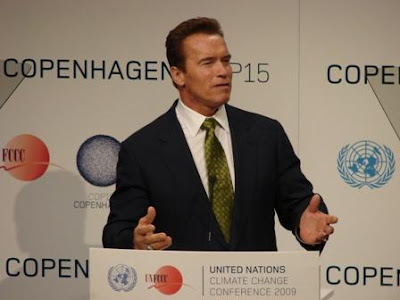 According to the former action hero  although high level decisions are necessary, they can be time consuming and less action oriented.

Schwarzenegger said: "I believe in the power of the people, the individuals, the activisits and scientists to be the implementers of new ideas."

The Mayor said: "I think too often we fail to see the progress made in those different levels."

Although the audience was captivated by his address, many were impressed by his sense of humour.

He complimented Copenhagen for their green approaches, and said that it was not his first time to the city.

"I have been here before to promote my movies, and for weightlifting conventions," to this the crowd laughed.

"I never thought I would even come here as the Mayor of California to address a climate change conference."

Despite that he ended his address on a humorous note saying: "That's it from me, and I'll be back."