Copenhagen, 15 December - According to research and statistics presented by Professor Rob Dunbar of Stanford University, the sea level will rise by 50-60 centimeters by 2050 and in the event of the entire West Antarctic ice sheet melting, the sea level will increase as much as six meters.

“This will be more dangerous for the small Pacific Islands as the biggest danger facing them is the fact that they do not have a high elevation to retreat to,” he said.

“I have been working in Pacific islands nations such as Kiribati and Tuvalu and have realized that these islands will become uninhabitable even before sea level rise takes over completely.” 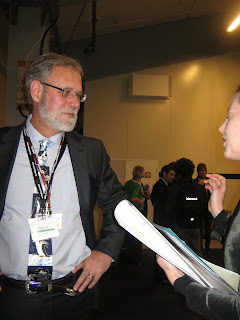 Dunbar (left) pointed that coastal erosion is already happening as well as king tides coming inland and destroying their food and water sources.

“The highest point in such small islands is merely one to two meters above the sea and because their water and food sources are getting destroyed by king tides, they may have to relocate even if the sea level does increase as such,” he stated.

While on the issue of oceans and climate change impacts, Ove Hoegh Guldberg says the world has already lost about 30 to 40 percent of corals over the last 40 years due to coral bleaching arising from ocean acidification.

The University of Queensland based representative said, “We are now losing corals at a rate of two percent every year and this is a lot faster than before.”

“There are a number of consensus papers stating that the only way to sustain the ecosystem is to pertain the atmosphere at 350 parts per million (ppm).